"Borderline" Cover, as heard on THE MINDY PROJECT

Heard this version on The Mindy Project's second season premiere and I thought it was a refreshing cover of the 80's hit song. It was equally refreshing to hear it used as background music for a very important ceremony on the show. The choice was uncanny, given Borderline's lyrics, but the music's tone and mood couldn't have been more perfect for the scene!

As for the show, overall, I thought the first episode for the second season of The Mindy Project had a clear direction. It was entertaining and well put-together from start to finish, which is to say that its writing was seamless. The show has had a few hitches at the beginning of its first season, which reflected on the series. This time, I think (and I hope!) that Mindy has it under control. I'm so excited for what else is coming on The Mindy Project!

This was what I wrote on my Facebook Page, after watching Season 2 Episode 1 (click photo for a bigger resolution): 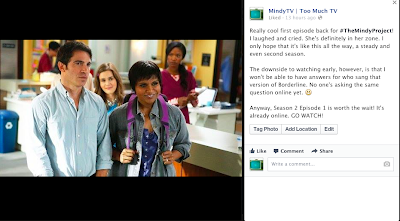 And this may be the right time to say that I honestly don't know what I'm going to do with this blog anymore (talk about clear direction!). Writing about TV shows can be super draining and time-consuming, especially if you do this on a regular basis, required and expected from you. I'd rather spend all my energy, or what's left of it, actually watching, you know?

So, as much as I would like to talk in great length about what I've just watched, micro-blogging works better for me now. (If this still isn't clear, this is my not-so subtle way of telling you --- over and over --- that you can find me blabbing about TV on Facebook or Twitter. Thank you for joining me there!)

You can check out my short feedback on the newest crop of shows for 2013 TV season on my Facebook album here.