ABC to announce second 'Roseanne' reboot with a Darlene spinoff?

In a bid to save thousands of people who lost their job following the abrupt cancellation of "Roseanne," sources reveal that ABC is working out a potential second reboot of the series.


TMZ reports that executives at ABC have been in talks with "Roseanne" producer Tom Werner over the weekend. The plan is to rebrand the series with Sara Gilbert's character, Darlene, leading the pack.

John Goodman apparently also expressed his willingness to be in the reboot, but there's a potential problem.

The actors play the vampire brothers Damon and Stefan Salvatore in The CW series.

The Salvatore brothers from "The Vampire Diaries" had a reunion in Nashville last Feb. 10. Ian Somerhalder (Damon Salvatore) and Paul Wesley (Stefan Salvatore) hung out together during a fan convention and posted a photo of their reunion on social media. 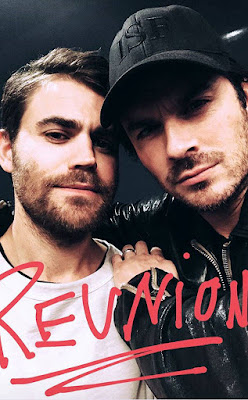 Somerhalder and Wesley were at "The Vampire Diaries" and "The Originals" Official Convention when they touched based and mingled with the participants. Those who couldn't make it to the convention, however, witnessed the TV brothers' reunion when Wesley shared their photo on his Instagram Story.

The image lit up social media as fans gawked and shared their reactions. After all, it's been one year since "The Vampire Diaries" folded up on The CW and fans have been missing the vampire brothers on the small screen.

There could be more of these cast reunions from "The Vampire Diaries" in the coming months, though. Creation Entertainment has schedules mapped out at different states until September.

Meanwhile, fans also learned another surprise when "The Vampire Diaries" showrunner Julie Plec confirmed that the beloved series has a connection to "Riverdale" apart from being both on The CW. The house that belonged to Cheryl and Penelope Blossom in the Archie Comics series adaptation used to be the Salvatore brother's house.

"I had seen Thistlehouse on camera but it hadn't registered with me," the showrunner told Bustle. "When we pulled up the driveway for the location scout to go see it, I was like, 'This is so familiar. I feel like I've been here before.'"

Plec detailed that when she got inside the house, she realized that they used the same property to film Damon and Stefan's place in the pilot episode of "The Vampire Diaries." Before the show moved to Atlanta for production, TVD had been filming in Vancouver, where "Riverdale" currently shoots.

"The Vampire Diaries" aired for eight seasons from 2009 to 2017. Aside from Somerhalder and Wesley, Nina Dobrev (Elena Gilbert) also made up the lead cast.

Email ThisBlogThis!Share to TwitterShare to FacebookShare to Pinterest
Follow other posts tagged as: ian somerhalder, paul wesley, The Vampire Diaries

'Star Trek Discovery' Introduces Captain Pike and Spock; Who Will Play Them in Season 2?

Producers said that they planned on having these characters in the season 1 finale months ago.

Viewers of "Star Trek Discover" got a surprise when two familiar characters made their presence felt in the season finale. Captain Pike and Spock from the USS Enterprise sent out an emergency distress call that the Discovery intercepted.

The ending left open the question on every "Star Trek" fan's mind. Will "Star Trek Discover" feature Pike and Spock in season 2? If so, who will play the characters?

Showrunner and co-creator Alex Kurtzman clarified what the season 1 finale's ending meant in an interview with Variety. He made it clear that the show is still very much focused on Discovery and its characters in season 2, hence viewers might not necessarily have to see Pike or Spock in the flesh and in a current timeline.